The Late Lamented Molly Marx – Molly Marx is dead. She seems to not even remember how it happened. But there she is. And now here she is – watching as the world goes on without her – her daughter, her husband, her best friend, the detective trying to figure out what really happened. And now there she is – 10 years ago as she plans her wedding, five years ago as she takes a lover, four years ago as her daughter is born. The story flashes back and forth between Molly’s life and afterlife to good effect. But dang it! While I enjoyed the story and think I’d love to have drinks with Molly, the ending was frustrating. Did I miss something? Because I never could tell just who it was that they were talking about as being responsible for her death. Thought it was one person, but then … I don’t know. Don’t get me wrong, I really liked this book, worth reading. But I’m not sure what to call it as it wasn’t really a romance (annoyed again at the push for us to cheer for her to run off with the guy she really loved rather than her husband) but can you call it a mystery when you never really see the solution? (Guess that makes it a real mystery.) And yes, I need to stop thinking so much and just enjoy my entertainment for what it is.

The Pressure’s Off: There’s a New Way to Live – Yes, I feel the pressure. I totally got Crabb’s basic point. As Christians, we often cling to the Law of Linearity – do A and we get B. It’s far too similar to the Romans trying to negotiate with the gods to get blessings rather than curses; it’s not only what God didn’t have in mind for us, it’s just plain wrong. This isn’t how grace and freedom are supposed to work. He’s advocating a new way he calls the Law of Liberty. And yes, it was for freedom that we were set free. (Just half of the liberty part I’m so passionate about.)

High irony time with this one. With most non-fiction, you can read the first couple of chapters to get the basic premise/argument/case/ideas, then jump around to the sections that expound on the parts you need more of. I’m very linear with books, so I skim the entire thing rather than jump. (OK, I actually read. Dang. Think how many more books I could read if I was a better skimmer!) But this one, I’m buying the idea that we shouldn’t be operating under a Law of Linearity; my bookshelf is testament to the attempt to do that with books prescribing specific methods for praying, leading, Bible study, etc. (I like clear directions and getting things right.) Liking the concept that it’s all about the joy of just being with God, knowing him rather than trying to extract blessing from him. So … given that this is the basic premise of the book, I’m concerned, amused, bemused by the later chapters of the book … which lay out specific points on how to live by the Law of Liberty rather than the Law of Linearity. Way to keep people hooked on linearity. Sigh.

Angel Time: The Songs of the Seraphim – OK, Anne Rice can write. No doubt about it. That said … well, I’m feeling ambivalent about this one. Interesting, yes. Some parts fascinating. But I never connected with the characters. And, the fact that Rice is working out her religion just is very in the forefront for me and distracting. Huh. Wonder if I would like it better if I knew less. End of the book definitely set up for this turning into a series with Lucky repeating his history changing, angel helping. But I doubt I’ll read more. (Watch, I’ll totally forget and be excited about a new Anne Rice and check it out.) 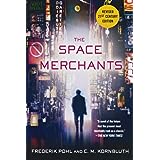 The Space Merchants – Short, sweet and great. If you’ve never read Fred Pohl, well, I probably still like Mining the Ort better, but this one would be a pretty good place to start as well. Similar in style and message to Heinlen or Vonnegut, so if you like those guys, you might get into this one. It’s a “Mad Men” world out there – Pohl’s future has the copysmiths and ad guys at the top of the heap in a jam-packed world that makes current Japanese apartments look spacious. (Seriously. A two-room apartment is a luxury item.) Forget the actual, semi sci-fi bits like the space ship to Venus. This one is about where we place our priorities, value of people as individuals rather than mass group and how we deal with dissident thought.

Bad Monkeys: A Novel – Yet another recommendation from Seth and wow. Still trying to wrap my head around this one. Lots of double agenting, good guys, bad guys, who’s on what team and what the heck just happened? going on here. See, we have good guys, who get rid of “bad monkeys”, that is evil guys. And we have evil guys who just plain like being evil. And we have a back-flashing story of Jane Charlotte whose story gets weirder and more complicated and weirder as we go. I was having flashes of 12 Monkeys and Kill Bill and the Matrix all at the same time. And it was fabulous! Not for the seriously straight-forward for sure. And I totally loved the format of the copy I had, tall and skinny and bright yellow. Sweet.

Here Comes Everybody: The Power of Organizing Without Organizations – Read the first chapter. And had no idea where we were going. Just couldn’t grasp the premise or it wasn’t jiving with what I thought the book was about based on stuff I had read about it. And decided that it probably wasn’t going to tell me something I didn’t already know (at least instinctively) so I just abandoned it. One of those uber-popular biz books that I had on the list because everybody had read it. Apparently, I’m not much with everybody these days.