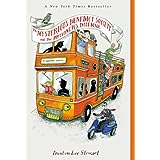 The Mysterious Benedict Society and The Prisoner’s Dilemma – Book three in what has to be one of my favorite children’s series. The Society is back together and living under Mr. Benedict’s roof for their own protection. But Curtain has plans, big plans, and it seems all the children – but especially Constance – play a role in them. The underlying puzzle haunts Reynie until he realizes what Curtain is up to, but by then, it’s too late and they’re caught. But these four clever friends – with a little help from the adults – manage to get the upper hand again in a dramatic way. These just get better and better and better. Dreading the day someone tries to turn them into a movie.

Red Chrysanthemum – Back to 1600s Japan and Sano, facing his most challenging case yet. Trust issues complicate everything as his wife Reiko is accused of a murder (and seemingly caught red-handed), Sano is implicated in a conspiracy to seize power and Hieko is missing details and clues as they pursue the truth. It’s another tangled web and a fight not only to maintain position, but stay alive. Probably not my favorite in this series, but a solid read. 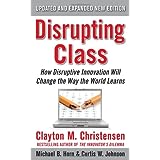 Disrupting Class: How Disruptive Innovation Will Change the Way the World Learns – Read this on the recommendation of one of my bosses after reading The Innovator’s Dilemma. Really relates to the work we do at my company because it’s about how and where disruptive technologies could come in and change the way education is done in the US. What would/could it look like, when will it happen and can schools handle it? Dry reading at times, loads of data but interesting. Big problem right now isn’t that schools don’t have the technology but that it gets used in a sort of ancillary way rather than core to teaching. As with all disruptive technologies, change will happen when computers and student-centered learning find the right spots to compete – the places where the alternative is nothing. Given that I had three study halls my senior year because I ran out of stuff to take, this would have been a godsend for me. Excited that my nieces and nephews will get to take advantage.

Everybody is Stupid Except for Me – Peter Bagge is a cartoonist with Reason Magazine, which is where I know him and how we ended up with this book. It’s chock full of his cartoons looking at everything from the anti-war protests to sex laws to gun control. It’s a big honking political comic book basically. And he has some interesting takes on things that hadn’t occurred to me, in part because he comes at liberty from a more liberal stance than I do, but we both arrive at the same point – get the heck out of my life. If you’ve ever wondered about what the heck libertarians are really all about (and it’s not being against roads), reading this one would at least give you a starting point for conversations with people who may or may not know what they’re talking about.

Seaside Letters – A romance. A Christian romance. So not my style these days. And yet, I couldn’t put this one down. Really. It’s told from both sides of the coin – the woman terrified of taking any more risks for love and the guy striving to be patient while waiting for her. I actually cared what happened to them! Yowsers! And blessed stars that while there were random, subtle inferences to God and so forth, this was far, far, far from being a hit you over the head with religion story. These were real people struggling with where God is in all things, not Bible thumpers. The end – for those of us in the know – much less subtle in pointing out the subtext theme, but if you aren’t a real churchy person, you’ll never notice. Until you read the book discussion questions after that. 🙂 But definitely worth a read if you like romances or chick flick types books in general.

(NOTE: Book received from friend at Thomas Nelson with no promise of review or other compensation. And other legal gobbledy-gook.) 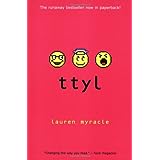 ttyl – For the non-teenager, non-texting crowd, ttyl stands for “talk to you later”. I had seen this book (and others in the series) before and just wanted to take a peek. It’s written as instant messaging among three teen girls and was surprisingly easy to read despite the crazy acronyms and so forth. Three very distinct personalities emerge just from the limited conversation and you tend to breeze through it without all the setting descriptions and so forth. Parents be warned though. Reading this will scare you to death if you have teen girls because of all the sex talk, clueless parents and so forth. So glad I don’t have kids! Because I remember so well being just like that. Love hard, lose hard, and everything’s a huge drama. Sheesh.

Nancy Drew and the Clue Crew: Pony Problems – I was working on a lens over at Squidoo about Nancy Drew books and was stunned to learn how many different versions there are out there! When I was a kid (walking two miles to school uphill both ways in three feet of snow), there was just Nancy Drew and mine were in the classic yellow covers. And there were just 56 of them. But apparently, after I had moved on to all kinds of other books in high school, Nancy Drew branched out. One such version – the Clue Crew – sends Nancy back to third grade, where she writes down important clues in her notebook and uses her noodle to solve simple and benign puzzles. I whizzed through it, felt like it was too simple for third grade but a decent early reader option. (Note, I was reading the original Nancy Drew in first grade. I have no clue what’s reader level appropriate. Some kids are just learning to read at that point. So never listen to me on this point.)

Beat the Reaper – This one, oh. Another recommendation from Seth and so worth the read. As long as you can handle gory and graphic. It’s the story of Peter Brown, hit man turned doctor whose past catches up to him one day in the hospital where he works. The current storyline is just one day’s worth of activity, but you go back in time with Peter repeatedly for the backstory of how he got where he is. Gripping doesn’t cover it. And, well, the ending – I have to admit I skimmed a bit because – yehhhh. A bit nauseating. But well worth it.

Switch – Finally! Was on the waiting list forever at the library for this one. And thinking I might want to buy a copy because it definitely speaks to where I am right now (thinking my elephant has died and the rider hasn’t noticed yet). Plus, I love the entire concept of small change. Ranted about it before related to our local TED event and have some additional thoughts to share. Small is good and per this book, necessary. And the Heath brothers write in a way that’s really engaging. Loved.

The Tale of Despereaux – I had originally planned to see the movie version of this, but read marginal reviews (from people who had read the book) so decided to go with the book instead. And enjoyed it, although it was probably a bit simplistic for most adults. Definitely a good one for reading aloud with your kids, though, as there is a narrator that occasionally talks directly to the reader – something I find disruptive when reading myself, but great when reading aloud. Plus, the action level is good for those disjointed bedtime reading sessions – you never feel like you’ve stopped at a point you aren’t eager to get back to. The dungeon and rat and death stuff might be a little icky for some kids, so judge accordingly for yours. But it’s a great adventure that could lend itself to active play as well.

Kiss – Finishing out the month with another thriller, this one by two authors I’ve read in recent months thanks to my Thomas Nelson source. Loved one, hated the other, but this was a joint project and I thought I’d give it a chance. The main character is the daughter of a Texas senator running for president. She’s in a car accident with her brother that leaves her in a coma and missing the past six months of her memory once she wakes up. But the coma and the memory loss might not have anything to do with the crash, but everything to do with information she revealed just before. Now that she’s awake, she’s on a quest to fill in the gaps, even when she knows it is anything but safe. It’s actually pretty cool and set in Austin, so I know some of the locations mentioned. And yes, God comes up a few times, but it’s really low key.