The Italian Renaissance – This is a sweeping overview of the time period written for older kids that Kevin picked up before we left for Italy. I was too busy in 1695 Japan to get to it before we left, so skimmed through it after returning. It wasn’t an exciting read, a bit better than a textbook, but pretty dense with information. Organized by topic, rather than just running through the period directly chronologically, so you get a great overview. Helped pique Kevin’s interest in some of the things we went to see (like the Medici chapel in Florence) so that they were more than just old buildings and art for him.

Woman’s Best Friend – My best (non-dog) friend gave me this collection of essays by women writers about their dogs some time before I left for New York last year. Upon returning, I couldn’t really face reading them. Thought I’d be better now, and I read most of these with delight. Some are truly excellent, some make you wonder why they bothered. There was one where the woman’s dog was attacked by a pack of wild dogs that I quickly skipped past. And then the one I was afraid would be in there – the woman with the Weim who had cancer and she had to make the choice to put him down. Cried for the rest of the afternoon after reading that one. Overall, a nice read – I did one essay per day – and a good gift idea for the female dog lover in your life. (As long as they haven’t recently lost their Weim.) 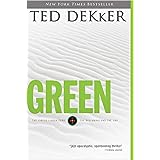 Green – This was another book sent to me by my friend at Thomas Nelson (free book, no promise of review, yadda, yadda, yadda). It’s billed as Book 0 in a series called The Circle; others are Black, Red and White. So basically, they’re trying to say it’s both the last book and the first book in the series. Given that time travel plays a role, that’s possible, although I always felt as though I was missing stuff because I hadn’t read the others. Could entirely be because I was aware that there were others that came out first, rather than any actual holes the other books needed to fill.

The story itself, not that bad, although I’m not clamoring to read the rest of the series, necessarily. It’s a fantasy story, sending Thomas Hunter into a future when he sleeps, although this particular book has him actually physically in the future. (Shades of Thomas Covenant here.) Definite religious overtones, although unless you went to Christian school and grew up in church like me, you might miss the direct Bible quotes and references; they’re pretty well masked. My real struggle was that most of the character development seemed to have taken place in the other books (one would hope) so this one was simply a roller-coaster ride of action, sweeping us along to an ending that … let’s say, it circles back to the first book and that circling leaves me highly unsatisfied. Essentially, there is no conclusion to this story. No happy ending, because there is no ending.

The Starfish and The Spider – No idea how I actually ended up with a copy of this in my possession. But finally got around to reading it. I’m not sure they’re really telling you anything new here; anyone who’s studied history can point to examples of decentralization defeating centralization. (One that comes to mind is the revolutionaries engaged in guerilla warfare against the British.) But it certainly can get you thinking about where your organization (and you, for that matter) stand on the scale of centralized vs. decentralized. For me, it brought to mind a current discussion about informal learning within our industry; it’s a move from centralized (we tell you what and when) to decentralized (you learn when, where and what without direction). Good ammunition if you’re trying to effect a change in your organization.

Death at Pompeia’s Wedding – OK, I had to go back to read a piece of Roman fiction after getting back from Italy. Now, granted, this series of mysteries by Lindsay Davies is set in Britain rather than Rome, but it’s still full of togas and tribunes and citizens. Libertus was already feeling uncomfortable about representing his patron at a wedding, but things get even more uncomfortable when the father of the bride dies. Yep, it’s murder (duh, it’s a mystery book), and fingers are pointed in a dozen different directions. There’s the usual looking down on Libertus because he’s a freedman and Celt and trademan rather than a noble, and the nailbiting over whether he’ll manage to solve the crime before he gets blamed for it. Nice, light and worth a read if you like historical mysteries.

The Reavers – I had such high hopes for this, but I finally gave up after 40 pages in which there was barely any action. Some sentences were like entries in the Faulkner contest (250 words, really?) and nigh impossible to parse. Add to that highly florid language and it just wasn’t for me. It’s one thing to make the characters talk that way, another to do simple descriptions in a way that makes them impossibly not simple. Bah. (Looking through other reviews, it’s definitely a love it or hate it book. Even fans of previous books by this guy were divided on this one.)

Barnaby Grimes and The Curse of the Night Wolf – Stewart and Riddell are among my favorite authors in the pre-teen/teen category. OK, among any category. I’m not entirely certain where this book falls in the Barnaby Grimes series – it was the only one the library had at the time – but I didn’t feel I missed anything if it wasn’t the first one. Barnaby Grimes is a tick-tock lad, basically a delivery boy in a word without higher forms of communication. In the course of his work, he runs across a mystery involving a doctor in a high-class neighborhood, the poorest residents of the city and a terrifying wolf. Or two. We didn’t get to participate in Barnaby’s cogitating the mystery, so the switch from “here’s the problem” to “here’s the answer” felt a bit abrupt. And … let’s just say there’s some gore and some suitable creepy things going on that might not make this appropriate for a sensitive kid (or adult). If you enjoyed the Edge Chronicles, this one is about on par with those.

The Ramen King and I – Recommendation from Seth and an excellent one! Have to admit, it took me about 100 pages before I caught on that this wasn’t a fiction book. Silly me. It’s a memoir of sorts, a walk down a painful road Raskin took toward fixing a lot of crap in his life and head, mostly related to his relationships with women. (Thus the “love life” reference in the subtitle.) It’s a lovely read, and there’s much to be gained by the principles and philosophies of Ando (the ramen king) Raskin shares in the book. The central thrust comes down to dealing with desires, understanding the motivations for them and learning to live with our limitations in the face of them. Yep, I’m working on that one, too.