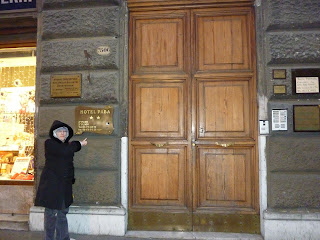 There are only two bajillion options for places to stay in Rome. And that’s before you start looking at apartments for rent. Our priorities are the same no matter where we go – king-size bed, breakfast (preferably full), internet access, location. Which made for a few tough choices as apparently no where in Italy do they eat things like omelets for breakfast, internet access is spotty and beds are small and cosy. Poo.

But we scored with Hotel Paba. Not entirely perfect, but nearly so. King-size bed, wi-fi (more on that), breakfast served in room and right near the Coliseum. And the lovely and helpful Alberta at the front desk! 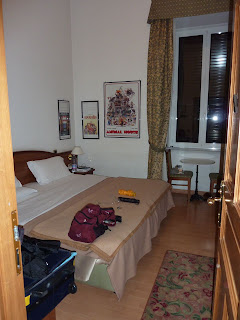 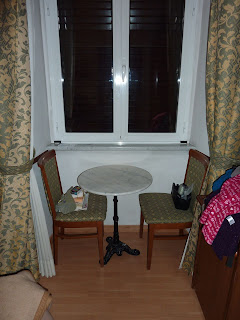 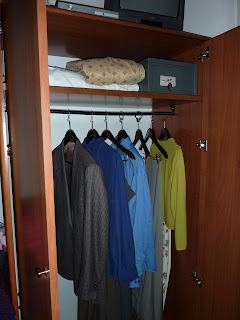 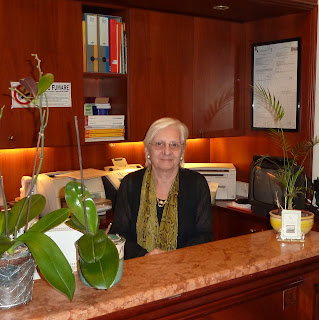 The room – high ceiling, view out onto the street, tiny alcove with the table and chairs, generous closet, mini fridge (with mini room available), decently sized bathroom. If you’ve ever been on a cruise, it was about that feeling, only add maybe 20 percent in size. Plenty of room for us and flat surfaces for our 300 suitcases. Couldn’t put them under the bed, though and no drawers for unpacking into except the tiny bedside drawers. Lamps on either side of the bed (for us readers) and you can control the overhead light from there as well. Heater (and AC I assume) up high on one wall and controlled via a remote. After the first couple of nights in which we couldn’t get warm enough, I figured out that the remote was the thermostat and we kept it on the floor so it would make it warm enough. Yowsers. Tons of extra blankets available, but the satin cover on the bed made it almost impossible to keep them on the bed. So heat, good. Close both sets of curtains and the room was pitch dark, perfect for sleeping. For waking up, not so much. 🙂 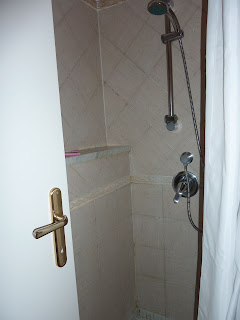 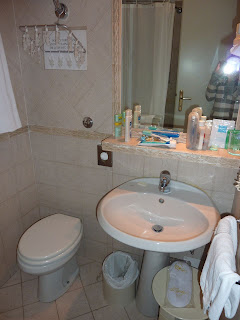 The bathroom had a shower stall (with constantly attacking curtain), with a nice high shelf for keeping the soap, etc. Plenty of hot water and good pressure. Speaking of the soap, one of my only real complaints was with the micro-sized bars. I understand for people staying just one night you don’t want to waste soap, but for those staying a week – would have been nice to have soap rather than slivers. Towels were fine, but not replaced the entire time we were there. Weird. Hairdryer, lots of hooks, slippers and a stool. 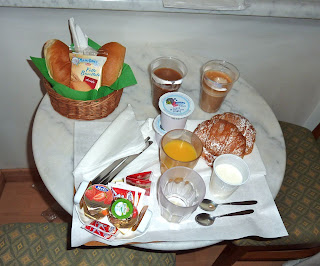 Breakfast was brought into the room every morning when you called for it. We were constantly oversleeping, so would have breakfast at 10, 10:30, etc. Alberta would bring in the tray within a few minutes of us calling, probably the time it took to make Kevin’s cappuchino. Tray had two of everything – croissants, rolls, coffee, yogurt, orange juice. Dish with jelly, cheese and butter to go on your roll. (We often bagged up the extra bread to carry with us to snack on later.) Very ample if you’re good with carb-y breakfasts. And always wonderful to have in the room rather than having to get dressed and head out. (One of our favorite things about cruising!)

Hotel Paba is just a block and a half off of Via Fori Imperali, the main street for the Coliseum, forums and Capitoline Hill. There’s a metro stop a couple of blocks up the street (Via Cavour) and tons of buses stop on Via Fori Imperali. In fact, two make rumored stops right outside the hotel. We never were able to catch them but there were signs, so I’m sure they do stop there. Generally, the location was fine, although outside of the ancient Rome sights, it was a bit of a hike to get anywhere else. We did take the metro a lot and the bus a few times to get around. Restaurants in the area were kind of OK or uber-touristy so we kept having to head out to get to the places we wanted to eat. I think staying closer to the Pantheon would have put up in a better eating spot. But Rome’s not that difficult to walk. Unless you’re wearing three-inch heels to get to dinner. That was a nightmare I’m trying to forget.

There was free wi-fi, which we took advantage of. But it was an odd set-up. You had to get time from Alberta that you would use within 24 hours. You had to give her your passport, then you were given a randomly coded username and password. Run out of time, go back and get more. Pass the 24 hour limit, go back for more. It was a strange system. But still, we were able to check email and keep up (a little) with the world.

Lewister Note: I’m an affiliate with a lot of places. Odds are any link on this blog that takes you somewhere to buy something, I’m going to get a small cut. To the tune of a pack of chewing gum most times. So just know, you’re keeping me in gum, OK?